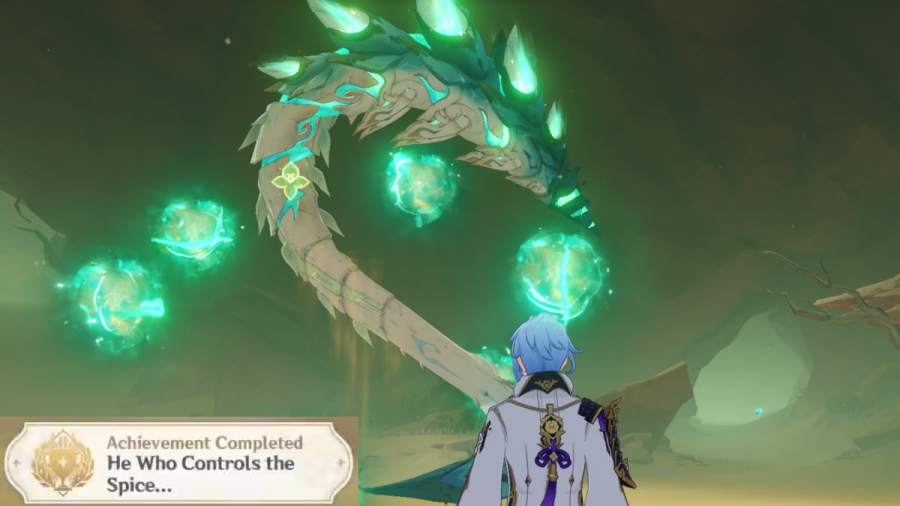 He Who Controls the Spice… is a Genshin Impact World Wonders achievement that can be obtained by using Wind Bite Bullets to perform whirlpool reactions and knock down the Setekh Wenut in its floating form. Before trying to get it, make sure you have access to the Setekh Wenut Cave in the Hadramaveth Desert on Sumeru.

Before challenging Setekh Wenut, make sure to prepare a character with the following characteristics:

Related: How to get the hidden It’s My Job Sumeru achievement in Genshin Impact

Setekh Wenut has a relatively simple attack pattern, constantly diving underground instead of actively bombarding you with attacks. However, you can still land hits as long as part of its body is exposed above the ground, allowing you to gradually reduce its HP. Once the boss’s HP is low enough, it will spawn entirely above the ground and summon Windbite Bullets.

Attack two Windbite bullets using hydro, pyro, Child, or electro. An archer’s charged attack will do the trick! Depending on his positioning, he may only need to attack once to destroy two of the bullets.

Doing so will force the boss to fall to the ground. You will immediately get the hidden achievement called He Who Controls the Spice…

For more Sumeru boss achievements, check out our guide on How to Unlock the Sumeru Beachhead Establishment hidden achievement in Genshin Impact here on MyFullGames.