Blacktail Review: A Fascinating Story Of Adventure And Tragedy - MyFullGames
Skip to content

Blacktail Review: A Fascinating Story Of Adventure And Tragedy 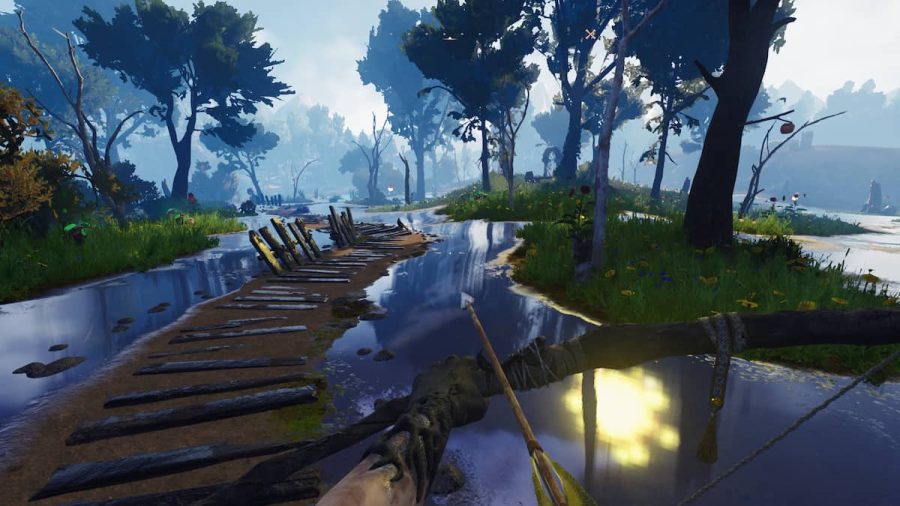 Baba Yaga is a household name to fans of Russian and East Slavic folklore. The ancient tale of the fearsome witch in the forest who rides on a flying cauldron, devours children, and resides in a hut sitting on chicken legs for stilts, is as shrouded in mystery as the dark forest she calls home. So when newly formed game development studio The Parasight announced Blacktail as an origin story for a young Baba Yaga, they had quite the thread to tell. The result is an endearing and passionate adventure that may not live up to his ambitions at times, but never loses its beautifully crafted identity.

Blacktail tells the story of Yaga, a young woman who comes from what is only known as the Village, a town plagued by a mysterious curse. Yaga and her twin sister, Zora, were raised by a foster family in the Village after her estranged mother disappeared. As more and more children from the Village begin to disappear, suspicions are raised against Yaga due to her strange appearance and the mask she hides under. However, it was only after her sister Zora disappeared from her that Yaga became too difficult to bear, as Zora was the only person who would protect Yaga from the world. What follows is a mystical adventure through a wildly fantastic land as Yaga tries to find answers about the disappearance of her friends, what happened to them, and most importantly, what happened to Zora.

At times, Blacktail’s narrative can seem too confusing for its own good and can cause many to lose the plot midway through the experience. Due to the mysterious nature of each conversation you have, you’ll need multiple playthroughs to really understand the timeline of events being narrated. This leads to more questions than answers, and it’s hard to believe Yaga isn’t so confused. As the story progresses, players are given little anecdotes from Yaga’s past. Thus helping us to slowly but steadily put together the pieces of an amazing puzzle. Even something as trivial as taking down a Bobok and listening to its feedback can shed light on Yaga’s situation. The narrative really stands out through the beautifully hand-drawn frames, which play out like cutscenes after pivotal points in the game. These scenes are beautifully narrated and at times turn into wildly emotionally charged mini-game platforming sections, creating a chaotic storm of visual effects and self-actualization.

In the early hours of the game, the world of Blacktail can trick you into thinking that it has offered you everything it can. However, as he travels farther and farther, he constantly comes face to face with structures that he would quickly mistake as having no business where they are. As the story progresses and we unlock new abilities, new forms of exploration also come into play. Frame-like structures scattered throughout the world, seemingly without any purpose, suddenly become helpful blinking buttons for easily traversing large sections. A fortress made of honey becomes the setting for a tower defense minigame. Stone pillars become teleportation points. The real incentive for exploration lies in revealing as much of the map as possible, opening chests to gain new abilities, and anticipating the next strange being to talk to or fight with.

True, the in-game traversal leaves much to be desired. Other than running, dashing, and using idols to teleport between locations, little else is offered. The world layout is built so that Yaga’s hut is at the heart of the world, with five different paths around the hut leading to different sections. This results in the world feeling less open and more contained within these five different sections, with little to no option to cross from one section to another. The problem is further compounded by the dearth of climbing mechanics, which means that to get to a section of the map quickly, the best thing to do is teleport back to your cabin, then run to where you need to be.

The in-game combat feels surprisingly rewarding for a first-person game with just a bow and arrow for a weapon. As the game progresses, Yaga gains new abilities to create different types of arrows, brew antidotes and potions, and unlock magic tricks known as Hocus to further aid in combat. She can also place a broom to push nearby enemies away from her.

While it feels good to be able to take down multiple enemies with a quick special attack, I feel like the combat starts to get old after a good few hours of repeating the same tricks. Also, the broom, one of the most essential items for combat, can only be crafted one at a time. This can be tedious in the long run. Combat is at its lowest point during lackluster boss fights, which are fairly predictable and lack the intensity we’ve come to expect from such encounters. Most of the bosses are stationary and their attack patterns can be learned in a cycle. It’s almost to the point where randomly spawning enemies in the open world feel more like a threat than the bosses themselves.

If there’s one thing Parasight Studios has nailed to the T with Blacktail, it’s the wonderfully designed atmosphere. The underlying sense of mysticism is never lost on the player, and the game reinforces this through its beautiful setting, sometimes juxtaposed by hauntingly haunting music. Yaga may be the only person in the game, but the world always feels alive. The music fades in and out seamlessly, the lighting is beautiful, Yaga’s footsteps sound distinctly different on different terrain, and every living thing is in a constant state of motion. As a result, it feels like a world that existed long before Yaga’s adventure and will continue to exist long after we stop using the controls.

Verdict – A Fascinating Journey of Mystery and Wonder

Coming from a newly developed studio, it’s safe to say that Blacktail had a lot to prove. Fortunately, Parasight studios have developed a game that oozes character and style. It has glaring flaws like a lack of traversal features, closed regions, and repetitive boss fights. However, the strangeness of the game allows it to carve out a place in your head that not many games these days can do succinctly. If you’re looking for an extreme RPG with looting and crafting elements, this might not be the game for you. But, if you’re a fan of big settings, music, dialogue, witches and cats, Blacktail is worth spending your time on.

We received this code from Focus Entertainment for review purposes.